Last month's DOstamperSTARS meeting was a shoebox swap.  We love a good shoebox swap and this was a great one! Our theme was "New Stampin' Up! Stamp Sets".  Here's just a few of the cards we all got to make. Enjoy! 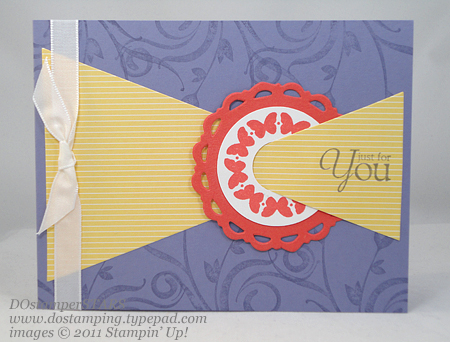 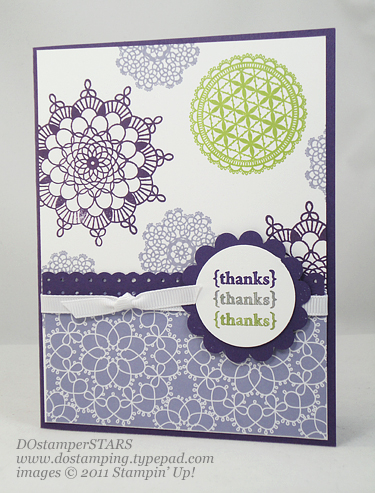 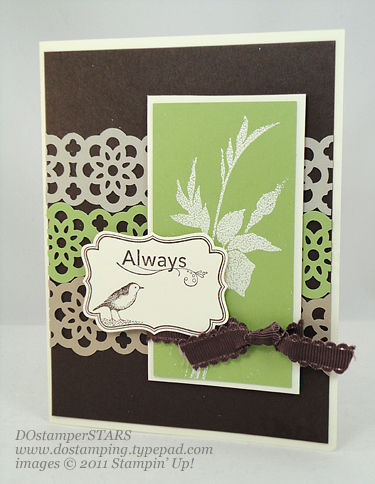 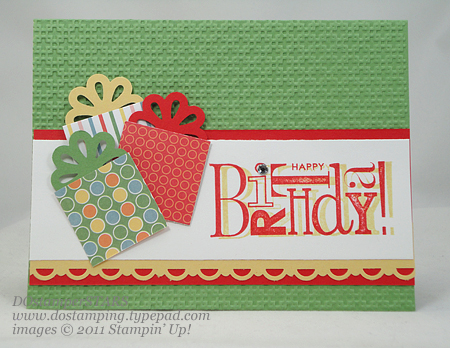 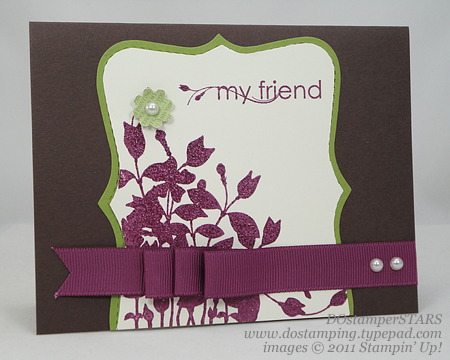 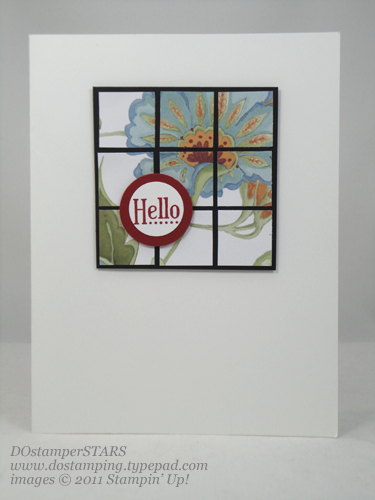 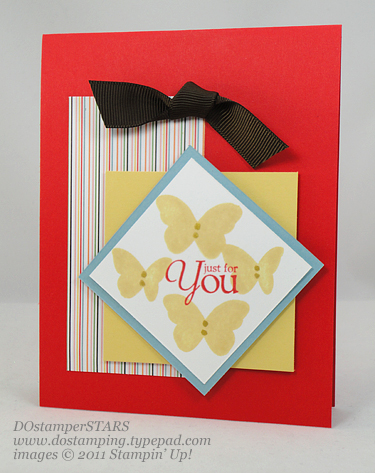 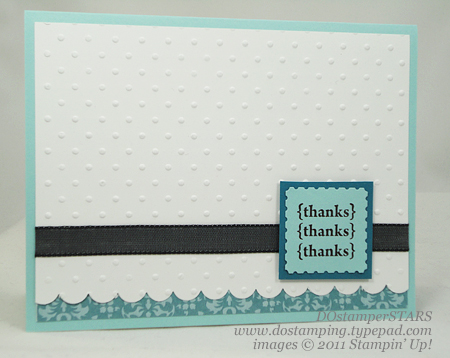 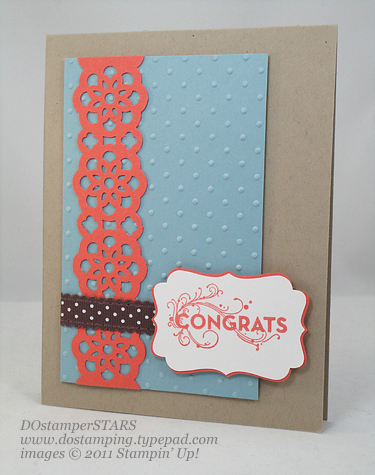 Aren't these awesome cards?  I've got a talented bunch of gals in my group!!  If you want to participate in swaps like this one, you might want to consider joining my group right now.  It's only 2 more days for the $99 Stampin' Up! Starter Kit and Christmas Keepsake Project Special.

I would love to have you join in the fun!!

Notepad and Matching card for Stampin' Up! Convention Roommates!

One of the traditions at a Stampin' Up! Convention is to exchange roommate gifts.  So today, I'm sharing the gift I did for my downline roommates. 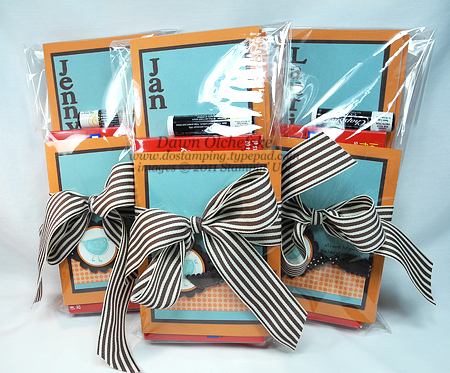 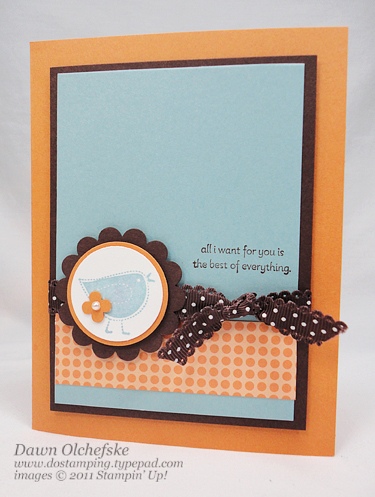 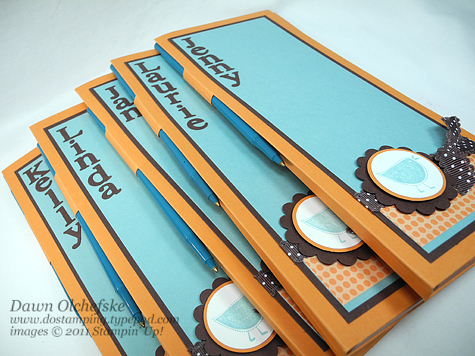 The gift package also included a box of licorice and a tube of chapstick (a must-have when in Salt Lake City!). 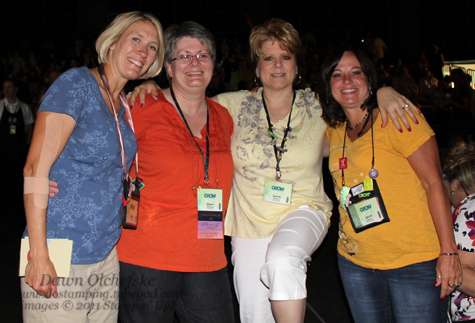 Here we are on the first day of the 2011 Stampin' Up! convention, Jenny, me, Laurie & Jan.  Let me tell you...those smiles didn't leave our faces the whole time!  What an awesome time!

Ooh - here's a sneak peak Shelli Gardner (CEO and Co-Founder of Stampin' Up!)  is sharing of the Christmas Keepsake Gift Project you'll receive when you sign up this month.  Only 3-days left!  To watch on YouTube, click here.

Just a Few Days Left to Join Stampin' Up! For only $99

I just wanted to send out a quick reminder that you only have a few days left (by July 31st) to join Stampin' Up! for only $99 AND ...
receive the awesome Christmas Keepsake Project for FREE!!

Check out the Stampin' Up! $99 Starter Kit details HERE!

I often get asked what I offer my new demonstrators or what my personal special offer is for signing up.   I don't generally have a special, as I think the value of the Stampin' Up! starter kit is already a GREAT VALUE!  Having said that...I do have some things I offer EVERY new person who joins my group.  It's my way of welcoming them to my group and helping them get started.  As I've been receiving a lot of inquires this week, I thought I would share with you the benefits of joining my awesome DOstamperSTARS team. 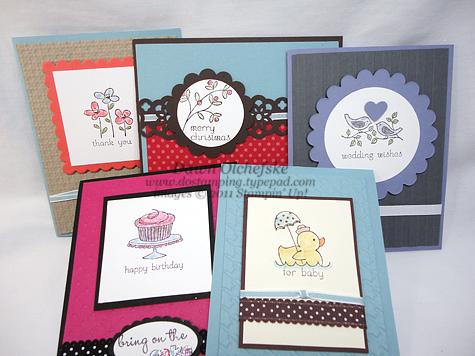 Whether local (west of the Twin Cities) or long distance, as a member of my DOstamperSTARS Team, you'll have access to support and additional opportunities & resources to help you grow your business:

If you currently have a Stampin' Up! demonstrator, please consider signing up with her.  However, if you don't have a demonstrator or you don't think she is a good fit for what you want to get out of your Stampin' Up! business, consider joining my wonderful team of DOstamperSTARS!

I want to give a warm welcome to the following gals who recently joined my DOstamperSTARS group:

Just a quick sneak peak at one of the cards we're doing tonight (and tomorrow) at my Technique Tuesday class. 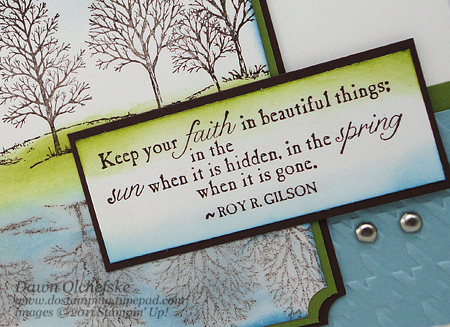 Fee:  $15.00 (or $5.00 for club members or DOstamperSTARS)
No need to bring anything.  Includes supplies (including adhesive) for three projects.

Wanna join a club?  Whether local or long distance, I've got an option for you!
Check out my CLUB CHOICES here.

Just wanted to share a card I've been doing for my workshops this month, as it's been a hit!!  It features the new Stampin' Up! background stamp called Hello Doily. Did you know...doilies are IN right now.  That's right and Stampin' Up! is right on it with not only a background stamp, but another four image stamp set called Delicate Doilies and a fun Designer Series Paper called Flirtatious (which this card features too)!  So much fun!

So, what's that oval focal point?  Glad you asked.  It's one of TWO frames you get with the Designer Frames Textured Impressions Embossing Folders.  They are like mini folders - so cute!  The greeting is from the new hostess stamp set called Precious Butterflies.

There is still time to get in on my popular Product Shares.  Here are the spots I still have open:

Missed the Stampin' Up! Convention? Check out the Highlights Video!

Each year Stampin' Up! ends their convention with a highlights video.  Actually it's amazing they can even piece together such a professional looking video in such a short time - even capturing the activites that happened just a few short minutes before they show it to us!

Check it out...FYI, you can get a quick glimpse of me at just under the 2 minute mark - he he!

Woohoo - what a great reminder of all the fun we had this year!

So, are you going to join us next year?  Not a Stampin' Up! Demonstrator yet?  What are you waiting for?  Start having fun now with an awesome $99 Starter Kit and Bonus Christmas Keepsake Gift!

I'm not sure where to begin...the 2011 Stampin' Up! Convention was an overwhelming week of inspiration, surprises, happy tears, joyous news, meeting friends face to face, reconnecting with "old" friends and more!

As you know from my previous post, I did make 2011 Founder's Circle (top 100 Stampin' Up! demonstrators).  Yes - I had a very good Stampin' Up! year, thanks to my loyal customers and club members, as well as my awesome downline.  I can't say THANK YOU enough!!  I'm ever so grateful!

This year I placed at #25.  My highest achievement in the four years I've been in Founder's Circle.  Admittedly - the number itself doesn't matter, as it's a HUGE acheivement no matter the number.

But the best news of all is, I was selected to serve on the Stampin' Up! Advisory Board. This is a huge honor. I'm humbled to be selected for this position. 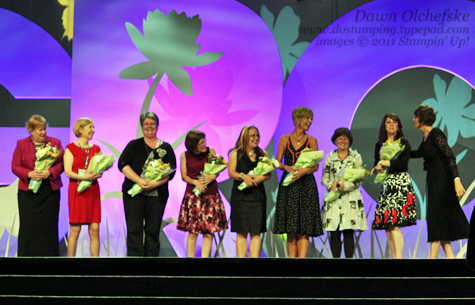 I was overwhelmed with congratulatory hugs and well wishes from hundreds of fellow demonstrators.  So many kind words that touched my heart.  Thank you everyone!

This convention makes me think of my very first Stampin' Up! convention 8 years ago in Orlando (I had only been a demonstrator for one year).  As it was my first, I didn't know many people.  I was rooming with people I had never met before, but had found through Stampin' Discuss.  I attended classes by myself, but was never alone, as demonstrators who found out I was by myself, befriended me in each class.  This first convention sealed the deal for me.  Meaning - my life changed that week.  I saw average, ordinary, but extraordinary women receive recognition after recogniton as they crossed the stage.  These women looked like me.  If they could do it - I could do it!

In addition, Shelli Gardner's (CEO and Co-Founder of Stampin' Up!) wrap up speech was exactly what I needed to hear at that time of my life.  At the time, I was a Controller for a small company and was struggling with my personal ideals and the ideals of the owners of this company.  It just wasn't working.  Then I hear Shelli talk about how future conventions would take place in Salt Lake City and why.  I know many demonstrators were disappointed with the news at the time, but I hung on her every word as she explained her reasoning for the decision.  She was saying what I wanted the owner of a company to say.  What did she say?  In a nutshell, that she valued her employees and their families!  Here was someone who walked the talked.  Wow - can you imagine that?  Not too many people do that.  It was what I was searching for and I found it in Stampin' Up!

I returned home and immediately set a goal to turn this "disount saving" demonstrator into a business demonstrator.  I set my sights on earning the incentive trip and to walk across the stage the following year (which I did!).  I'll be honest, if I hadn't experienced the magic of a Stampin' Up! convention, I don't know where I'd be today.  But even back farther...if I hadn't said "yes, what the heck, I'll be a Stampin' Up! demonstrator", I know that I'd probably still be unhappy in that job.  So take that leap of faith - you never know where it will lead you.  What do you have to lose?

Maybe the real question to ask yourself is, "What do you have to gain?"

Thanks for indulging me~Dawn O

We arrived safely in Salt Lake City for the 2011 Stampin' Up! Convention.  Quickly checked into our hotel and then made a bee line over to the Convention Center (right across the street) to get our convention bag.  Each year Stampin' Up! outdoes themselves with an awesome bag/tote and this year was no exception!  Take a look... 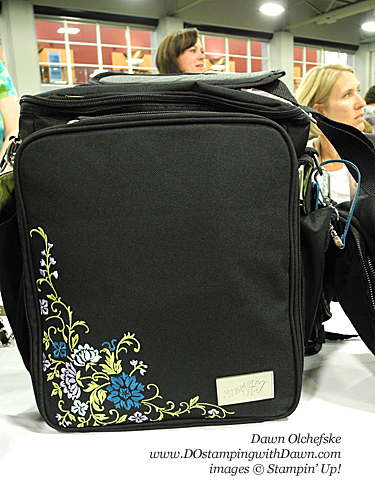 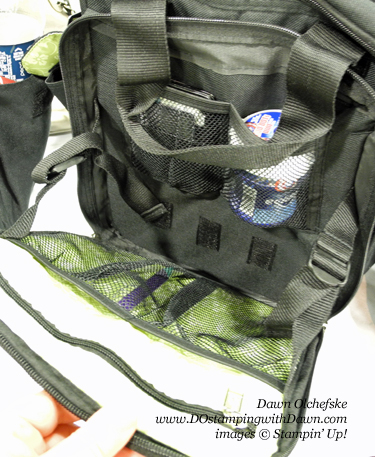 Look familiar?  If you're a Stampin' Up! demonstrator - this bag may look familiar to you.  That's because it's a mini version of the Demonstrator Business Bag only SU demos may purchase.  LOVE IT!!!  See below for first time conventionee and DOstamperSTARS, Jenny Maetzold with THE BAG. 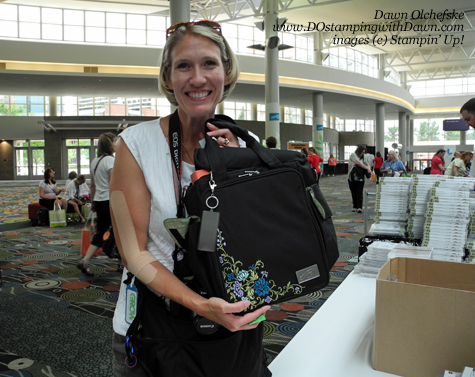 As some of you know who follow my blog, Stampin' Up! recognizes the Top 100 Stampin' Up! demonstrators each year.  It's based on our performance and ranking of various criteria.  I've been amazed and honored to be in the top 100 the past 3 years and was thrilled to learn that I made it again this year - WOOHOO!!!  One of the fun perks of this honor is to be part of a group that Shelli Gardner (CEO and Co-Founder of Stampin' Up!) calls Founder's Circle and we receive a special trip in the fall, and an exclusive purse/tote.  Here's me with THE PURSE! (and my loot!) 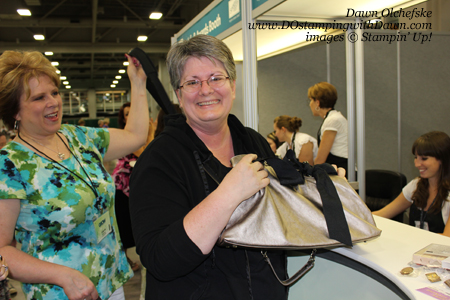 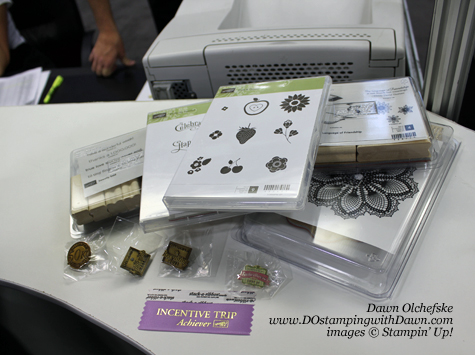 Below is Maxine Conrad, my Stampin' Up! Support Account Manager.  She was a great support to me and a cheered me on throughout the year.  I so appreciate all she did for me and am honored to call her my friend. 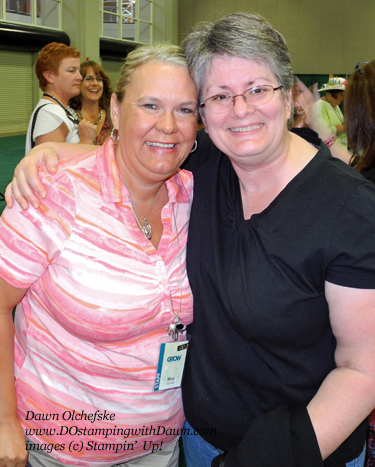 Tonight ended with a Stampin' Up! party, lots of great demonstrations showcasing new Stampin' Up! product, a fun stamping event held by Ronda Wade and swapping, of course!

Tomorrow is a FULL day of demonstrations, classes, swapping and awards night.  I'll share more when I can.  So much fun being a Stampin' Up! demonstrator!  You too can come next year.  Only $99 to sign up during July - check out the $99 Starter Kit Offer

Thanks for stopping by!