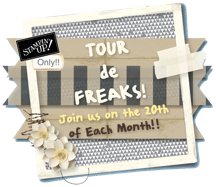 That's right -- the Control Freaks are leaving their links active so you can come back as often as you like to take the tours again (or take them for the first time right now)! See some great projects that you want to CASE -- no problem, hop back on the bus and enjoy the scenery again and again and again! There will be a new tour on the 20th of each month so the inspiration will be endless!